First Edition. Only Volume II Present. The eighty-five essays, under the pseudonym “Publius”, were written by Alexander Hamilton, James Madison, and John Jay. They were designed as political propaganda, not as a treatise of political philosophy.

In spite of this ‘The Federalist’ survives as one of the new nation’s most important contributions to the theory of government. ‘The Federalist’ exerted a powerful influence in procuring the adoption of the Federal Constitution, not only in New York but also in the other states. There is probably no work in so small a compass that contains so much valuable political information. The true principles of a republican form of government are here unfolded with great clearness and simplicity. 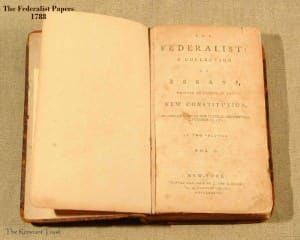