One of three known copies.

“The only one in private hands.  This is the third Dunlap printing.  John Dunlap, as one of the leading printers in Philadelphia, produced numerous pieces both for the Continental Congress and the state of Pennsylvania. Only one complete set of the eight parts of the Journals survives, at the Library Company of Philadelphia.  The Library Company also possesses the only other copy of this individual part, the most extensive of the eight, comprising page 29-56.  Thus, this is the only copy in private hands, with two copies in one institution, for a total of three known-considerably rarer than the infamous first broadside printing, of which there are 31, but from the same printer and press.”

The Declaration of Independence is the statement “which announced that the thirteen American colonies, then at war with Great Britain, regarded themselves as thirteen newly independent sovereign states, and no longer a part of the British Empire.” A committee of five including Thomas Jefferson, John Adams and Benjamin Franklin was tasked with drafting a formal statement of the colonies’ intentions. The statement, largely written by Jefferson, was presented to Congress on June 28, 1776 and was adopted by the Continental Congress meeting at Philadelphia, Pennsylvania on July 4, 1776 after the Congress debated and revised the statement. The term “Declaration of Independence” is not used in the document itself.

TITLE: Declaration of Independence by Congress 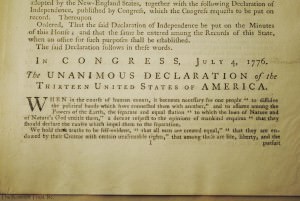