First Edition. Catechism of Political Economy by Jean-Baptiste Say, a French statesman and economist; was born in Paris on the 6th of June 1826.

He displayed talent for interesting popular audiences in economic questions.  His sympathies, like those of his grandfather, were with British school economists; he was indeed the hereditary defender of free-trade principles in France.  He had, moreover, an intimate acquaintance with the English language and institutions, and translated into French Goschen’s Theory of Foreign Exchanges.

He was one of the pioneers of the co-operative movement in France.  Elected to the Assembly of 1871 by the department of Seine and Seineet-Oise, he adopted the former and took his seat among the Moderate Liberals, to whose principles he adhered throughout his life.  He was immediately chosen as reporter of the commission on the state of the national finances, and in this capacity prepared two elaborate statements.

He had, however, a large share in the successful opposition to the income tax, which he considered likely to discourage individual effort and thrift. 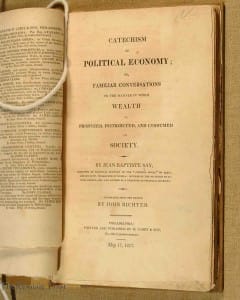